From TerraFirmaCraft Plus Wiki
(Redirected from Mudbrick)
Jump to: navigation, search
Mud

Mud is crafted by dropping and equal number of dirt and straw, and then pouring water from a bucket, such as the Ceramic Bucket, onto the items. 1 straw and 1 dirt will give 2 mud. A bucket of water can turn 32 dirt and 32 straw into 64 mud.

Mud can be used to create stone-age building blocks, making it useful for making early game shelters when more advanced materials such as wood or stone are not available.

Both types of Mud building blocks can be Plastered to make them harder to break. 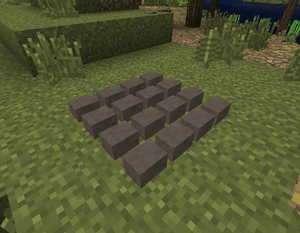 Mudbrick is one of the two building blocks crafted from Mud.

The first step in crafting Mudbrick is to craft Mud Bricks by placing Mud in a crafting slot. Then, the Mud Bricks must be dried by shift and right clicking it onto a block exposed to the sun. Mud Bricks will only dry in the day (between 6 AM and 6 PM).

After the mud brick is dried, it can be harvested instantly by left-clicking the block. The dried mud brick can now be used to craft Mudbrick. Mudbricks will turn to dirt if placed in water. Since Mud is sensitive to moistness, even if it is dried, it cannot be used for creating a Food Preparation surface.[1]

Wattle is a simple building block made of woven sticks.

While Wattle is easy to make and can serve as an early game fence or wall, it can be set on fire by Torches and since it is not a full block, items like Tool Racks and Candle Holders cannot be placed on it.

Right Clicking on the wattle. Unlike Mud Bricks, Wattle and Daub does not need to dry.

The Wattle Door is an early game version of a wooden door. It can be made with two poles and two wattle.