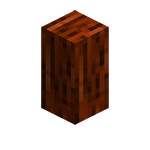 Support beams are used to prevent cave-ins. This prevention is applied with the horizontal section of the support beam in place. Vertical or corner support beams will not help in preventing a cave-in.

There are a few rules when placing support beams:

A single horizontally placed support beam will prevent cave-ins from originating and stop dirt/gravel/cobble from falling from an area that is 4 blocks in each horizontal direction, and 1 block above and below the beam (9x9x3 Area). Note that sand will still fall in this area. Raw Stone that is within this area can still cause cave-ins that originate outside the area when mined. Raw stone that is mined, regardless of if it is supported or not, will randomly scan an area that is 4 blocks in each horizontal direction, and 2 blocks above and below the raw stone (9x9x5 Area). If this random scan finds raw stone or ore that is unsupported, the unsupported block will become the epicenter of a cave-in that will then spread outwards.

Unsupported blocks that are the epicenter of a cave-in can also propagate cave-in's back to supported areas. Cave-in's that fall on a support beam will break that block, and all other connecting horizontally placed support beams, before continuing to fall to the ground. Additional broken support beams may then cause other collapses of gravity-affected blocks to occur. Support beams are a tool for cave-in prevention, and not protection. Mine safely!