From TerraFirmaCraft Plus Wiki
(Redirected from Food/Fish)
Jump to: navigation, search

Fish are a mob that can spawn in water blocks in Lake, River and Ocean biomes. Fish can spawn and despawn after the initial world generation, like deer and pheasants. Fish will swim, usually in schools, in bodies of water. If they are approached by a player, fish will speed up to escape them. If the player persist in trying to chase them, they will simply disappear, discouraging the players from trying to fish with weapons.

There are currently eight unique species of fish in TFC+: the Bass, the Trout, the Pollock, the Wahoo, the Blue Striped Tamarin Wrasse, the Lined Butterflyfish, the Queen Angelfish, and the Spotted Parrotfish. The latter four fish are all reef fish, whereas the other four spawn in open water. (All different fish species drop the same food item, the main difference between them is the conditions in which they spawn.

In order to start fishing, the player has to craft a Fishing Rod.

Bass are medium sized fish with dark green scales and a greenish-tan underbelly. They also have large dorsal and caudal fins, which are green in color. They spawn in Lake biomes regardless of region and temperature.

Pollock are slim fish with silver and dark gray scales. They also have relatively small dorsal and caudal fins. Pollock spawn in colder Ocean biomes, and can also spawn in arctic conditions. One thing to note is that there is some overlap between the spawn regions of Pollock and Wahoo.

Trout are medium sized fish with light brown scales and a lighter underbelly. They have a streak of pink scales that run down both their sides. They spawn in River biomes regardless of region and temperature.

Wahoo are large fish with blue scales and a light blue underbelly. They have light blue stripes running the length of their bodies and have a long dorsal fin. Wahoo spawn in warm Ocean biomes. One thing to note is that there is some overlap between the spawn regions of Pollock and Wahoo.

Several Fish are found only near Coral reefs, which spawn these fish daily. These fish will also naturally despawn after 1 in-game day.

Lined Butterflyfish are a reef fish with a tall, flat body, shaped somewhat like an arrowhead. They have pointed snouts, yellow fins, and several black stripes running vertically up their bodies. Lined Butterflyfish only spawn in coral reefs, despawning after 24 hours when the reef spawns new fish.

Spotted Parrotfish are a larger reef fish with blue-green scales, a short snout, oval body, swallowtail-shaped tail, and brightly colored markings on their scales, especially on their tails and dorsal and ventral sections. These bright markings come in two varieties: Yellow and Pink. Spotted Parrotfish only spawn in coral reefs, despawning after 24 hours when the reef spawns new fish.

Several types of fish including the Blue Striped Tamarin Wrasse, Lined Butterflyfish, Queen Angelfish, and Spotted Parrotfish are classified as reef fish. Unlike other fish, which can spawn throughout most of a biome, reef fish only spawn at Coral Reefs.

Coral Reefs are structures which spawn in warm oceans in areas with Chalk sand beaches. They will spawn at the edge of shore biomes farther from the land, and never in the open ocean. They are usually around 10 - 20 blocks wide and consist of a dark gray coral substrate block, on top of which is coral. There are five types of coral: Brain Coral, Fan Coral, Table Coral, Staghorn Coral, and Tube Coral. Table and Fan coral spawn more regularly than Staghorn, Brain and Tube coral.

Brain Coral appears as a rounded, blocky mass with a brain-like pattern of wavy sulci on its surface. It can come in many sizes and colors, usually tan, brown, yellow, orange, and purple.

Fan Coral appears as a flat, vertical or nearly vertical plane of coral with a dense, branching pattern. It can come in many sizes and colors, often changing color slightly higher up on the fan, usually white, pink, lavender, red, purple rising into blue, light blue rising into cyan, red rising into orange, and red rising into yellow.

Table Coral appears as a flat, irregularly shaped chunk of coral, holding close to the seafloor. It has a rough pattern that gets darker towards the outside, and a light colored border. It can come in many sizes and colors, usually tan, yellow, green, blue, and purple.

Staghorn Coral appears as an erratically branching coral with a sprawling set of narrow branches and a slightly dotted texture, with the branches getting thinner the farther they are from the base. It can come in many sizes and colors, usually red, yellow, brown, salmon and lavender.

Tube Coral appears as a mass of vertical tubes, getting wider towards their tops. It can come in many sizes and colors, usually golden yellow, pink and blue.

The coral types have no separate function from each other, although staghorn coral, tube coral, and fan coral don't collide with the player or other entities, as to prevent the fish from getting stuck (Brain Coral, Tube Coral, and Table Coral do collide, as their shapes are not as likely to get entities stuck). The Coral substrate block (simply called 'Coral' in game) can be mined and placed like a normal block. Breaking the coral itself will yield limestone rocks, meaning it is possible to make flux from coral. Breaking the substrate will not break the coral on top. Both the coral and the substrate must be mined with a pickaxe.

Each day at dawn, the coral reef will spawn several reef fish, which will swim around the reef, usually sticking in the close area. After 24 hours (at the next dawn), all of these fish will despawn, and a new set of fish will respawn. The fish that spawn are determined randomly, so not all types of fish will always be present. This way, coral reefs can be a renewable and reliable food source for fishing. Breaking all the coral in a reef will render it destroyed, and no more fish will spawn.

Sharks may occasionally spawn in Coral Reefs and attack players that have raw fish or meat in their inventory. This creates a larger risk for fishing in coral reefs. 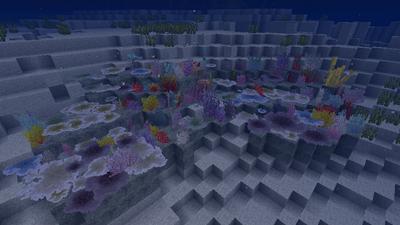 A typical coral reef with many fish.

Fish can be used as Food, and provides Protein nutrition.