Reef Sharks are a neutral aquatic mob that can rarely spawn from Coral Reefs. 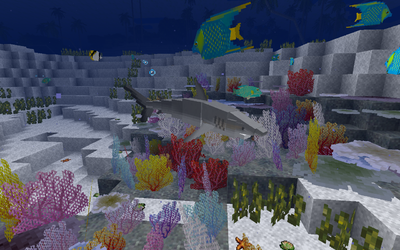 A Reef Shark in a Coral Reef.

Sharks are neutral mobs. They normally swim in the general area in which they have spawned, generally avoiding the bottom of the sea.

Sharks will mind their own business until a player enters the water while either bleeding or carrying raw meat (it should be noted that raw fish also qualifies as raw meat). If a player enters the water and either of those conditions are met, nearby sharks will quickly swim towards the player and try to bite them, dealing 300 damage on a successful bite. After a shark has successfully bitten a player, it will enter a "cooldown" state that prevents it from attacking again until some time has passed. Bleeding players attract sharks from farther away than players that happen to be carrying raw meat.

As of the current version (0.85.6) sharks do not react in any way to being damaged, and do not drop anything upon being killed.