From TerraFirmaCraft Plus Wiki
(Redirected from Body Temperature)
Jump to: navigation, search

The HUD consists of the user's health, hunger, thirst and experience bars. Unlike in vanilla, there is no armor rating bar.

Instead of hearts, health is represented with a red-colored bar and white text overlay. When a player first spawns, they have a maximum health value of 1,000 HP. This value increases and decreases depending on the player's nutrition and experience levels. If a player's max health increases, the bar will update to show the new health available to be regenerated.

Health regenerates very slowly over time, as long as the player's hunger bar is at least 25% filled. Mob health is also increased, although not proportionally; creepers for instance have much less health relative to the player than in vanilla. The damage done by a player's fist is also scaled, doing 10 HP instead of the vanilla 1 HP.

Swimming in a hot spring will quickly regenerate the player's health.

Instead of haunches of food, hunger is represented with a green-colored bar. Players have a stomach capacity of 24 oz. When eating the majority of food, the player can consume a maximum of 5 oz at a time. Sandwiches are the exception, and the player will consume as much as possible to become full. If the hunger bar is filled is above 19 oz, the player will only consume enough to fill their stomach. This means that it is impossible to over-eat, and saturation is therefore only acquired through eating sandwiches and salads. While holding food in the player's hand, the depleted hunger bar will light up slightly, indicating how much that particular piece of food can fill the bar if completely consumed.

Unlike vanilla, the hunger bar does slowly deplete over time while the player is standing still. Hunger is primarily depleted by performing actions such as breaking blocks or attacking. Having a low Body Temperature will cause the player to deplete their hunger faster, as they are consuming calories faster in order to keep themselves warm. If the player sleeps through the night, the hunger bar will deplete half as much as if the player had been awake the entire time. The only exception to this is the Wicker Teepee which does not provide as much hunger depletion reduction as the other methods of sleeping.

Thirst is represented with a blue-colored bar. The thirst bar, like the hunger bar, slowly depletes over time even while the player does not move. It can be refilled by drinking water; either by drinking directly from a fresh water pool with

Right Click or by drinking from a ceramic jug. Thirst is primarily depleted by running around. Having a high Body Temperature will also cause the player to "sweat" and deplete their thirst faster. If the player sleeps through the night, the thirst bar will deplete half as much as if the player had been awake the entire time. The only exception to this is the Wicker Teepee which does not provide as much thirst depletion reduction as the other methods of sleeping.

The experience system represents life experience, and so each level increases a player's maximum health and thirst, allowing them to take more hits, and survive longer without drinking.

When the player's body temperature is outside the green (comfortable) range, they will begin to suffer from effects such as Mining Fatigue, Slowness, and the lowering of their Skills, and may not be able to sleep in Teepees or Straw and Hide Beds. When a player is too hot, they will get thirsty more quickly, as their bodies will "sweat" to cool themselves off. Sweating also causes clothing worn by the player to become damp, losing some or all temperature protection. Likewise, when a player is too cold, they will get hungry more quickly, as their bodies will burn more calories to keep them warm. If the player's body temperature is extremely hot or cold, negative effects increase and a death countdown timer will appear under the body temperature gauge showing how much longer the player can endure the current temperature before they die of heat stroke or hypothermia.

Temperature resistance determines the size and location of the colored ranges on the temperature meter. Clothing adjusts the player's comfort range. For example, grass clothing gives the player heat resistance, which extends the green range upward. Wool clothing protects gives the player cold resistance, which extends the green range downward (too much wool clothing can make the player less resistant to heat). With the right clothing, it is possible for the comfortable zone to cover a wide range of temperatures. Drinking water will give a small buff to heat resistance for a short time. Standing near an active firepit or forge will give cold resistance that builds up over time to a max of 2 minutes.

Prolonged exertion will produce an "Exertion: Heat" status effect. This raises the felt temperature by the amount in the tooltip. Resting by standing still will speed up recovery from exertion.

The player can get wounded in various ways. Wounds cause the player's health to drop and can also slow the player's walking speed. Wounds can be managed through the use of Medicine.

As in vanilla, all experience levels are lost on death, resetting the bonuses attained from them. In addition, players will respawn with partially-full health and hunger bars. Other bonuses such as the expanded crafting grid will be lost. This is designed to encourage players to play more carefully and to protect themselves. 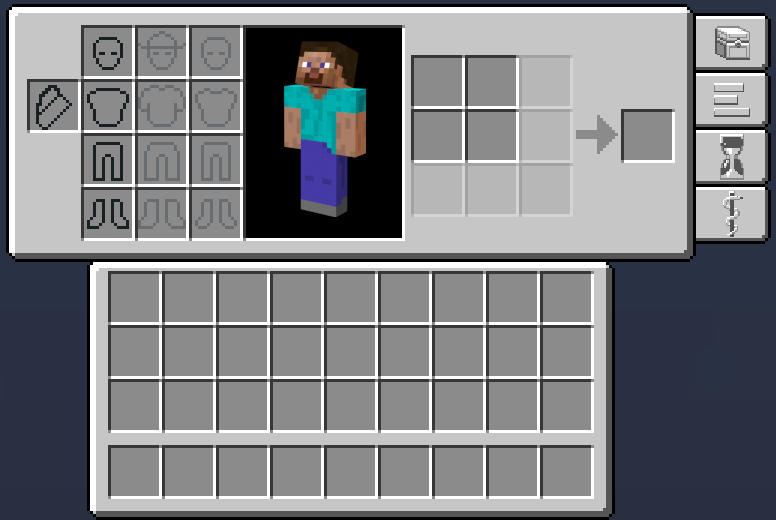 The player's inventory consists of four armor slots, four clothing slots, a back slot, a crafting grid, and 36 storage slots. There are also four tabs to the right of the inventory to switch between inventory, skills, a calendar, and health.

The back slot can hold a Quiver, as well as large items such as Anvils, sealed Barrels, and sealed Large Ceramic Vessels. Larger items will overburden a player, making them unable to move if the item is not stored in the back slot.

Note: Many of the crafting recipes have special handlers behind the scenes that require that the player uses the inventory crafting grid. Because of this, while crafting a secondary table will give the block, the block cannot be used normally when placed in the world, and is only used for decoration, or as a crafting ingredient in other mod's recipes.