From TerraFirmaCraft Plus Wiki
(Redirected from Barrels)
Jump to: navigation, search
This page contains changes which are not marked for translation.
Other languages:
English • ‎español • ‎русский 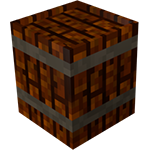 Brine is created by adding a single bucket of vinegar to a barrel containing at least 1,000 mB of salt water. The recipe is instant, and does not require the barrel to be sealed. There must be space in the barrel to add the vinegar; therefore, a bucket of salt water must first be removed from a full barrel of salt water before brine can be made.

Curdled milk is created by adding a single bucket of vinegar to a barrel containing 9,000 mB of milk, and sealing it for 8 hours.

Note: Currently, only a proportion of 1000 mB of Vinegar to 9000 mB of Milk will work. It is not known if this is intended.

Powder kegs are created by placing gunpowder in the solid storage of a barrel, sealing the barrel, and then lighting it with a redstone signal or by being exposed to Fire. A powder keg that has been lit can be disabled by using

Note: A straight line of Log Piles -each with 1 Log- can be lit by a Firepit and used as a fuse to activate a Powder Keg from a distance without using Redstone. This is an unintended side effect of the use the mechanic used to light Kilns.