From TerraFirmaCraft Plus Wiki
Jump to: navigation, search
Firepit 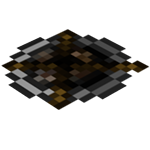 Firepits are created by dropping (Default: Q) three sticks on the ground, then using a firestarter or flint & steel on the block under them. Using the firestarter may take multiple tries before the firepit is successfully lit. Dropping a piece of straw in with the sticks will make the firepit easier to light.

Firepits that are directly exposed to precipitation will not consume fuel, and will eventually burn out. To prevent this from happening, a block should be placed above the firepit to protect it.

Once the firepit has been lit it will quickly burn out unless more fuel is added. In order to relight the firepit, at least one piece of fuel must be in the fuel slots, and a firestarter or flint & steel must be used to

Firepits are used for lighting torches and candles, cooking food, heating up low-tier items for smithing, and burning Sea Weed to make Soda Ash or being broken after use to make Ash for Glassworking. Firepits also provide a safe light source, as they do not set other blocks on fire -with the exception of Log Piles with a single Log inside. They will, however set players and mobs on fire. Firepits also provide a heat source for wrought iron Grills. Note: Firepits cannot be used to smelt ore.

Firepits will gradually heat items in the heating and output slots as long as it is burning fuel. Metal items that reach their melting temperature will combine with any empty or partially-filled ceramic molds of the same metal type in the output slots. If there are no ceramic ingot molds in the output slots, the melting metal will be destroyed.

Items in a firepit can only get as hot as the current burning temperature of the fuel. A bellows can be used to increase the current burning temperature of the fuel (by up to 600 C which decays over 10 seconds), and heat the firepit twice as fast at the expense of consuming the fuel twice as fast. Note: Bellows only affects how quickly the firepit itself heats up. Items heating up inside of the the firepit will heat up at the same rate regardless of if a bellows is used or not.

When the firepit runs out of fuel, or when it is exposed to precipitation, the items in the heating and output slots will start to cool down, and the firepit will eventually turn off.

Note: The Ceramic Blowpipe can be used as a less effective bellows (adds 200 C which decays over 10 seconds).

This section is about Ash from firepits. For the Ash tree, see Trees.

When a Firepit is broken, it will drop 1-5 Ash, which can be used in Glassworking. All Firepits will drop at least 1 Ash. The amount increases by 1 up to a maximum of 5 for each Log or Stick that is consumed by the Firepit.

Ash can also be made into white dye to dye clothes. 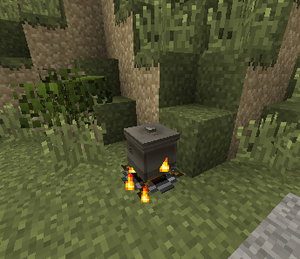 A Large Ceramic Vessel mounted on a firepit.

Large Ceramic Vessels can be placed on top of a Firepit by holding shift and right clicking. This is used to make Slimeballs, get salt from seawater, or melt snowballs to get fresh water. A second Large Ceramic Vessel can be placed, with a Ceramic Blowpipe sealed in the first vessel, to form a Still, which can be used to distill fresh water from salt water, and to refine fermented alcohols.

A Firepit surrounded by blocks to create an Oven. Notice that there can be multiple designs, as long as the firepit and preparation surface is enclosed with blocks. 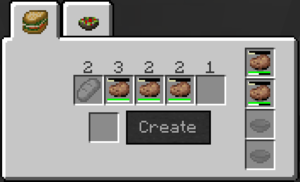 A food preparation surface set up to cook food as part of an oven.

Ovens are a controlled and precise way to cook using firepits. The basic setup of an oven is a food preparation surface directly adjacent to a firepit. To increase the cooking speed of the oven, enclose the firepit and food preparation surface in fireproof blocks. Blocks that make up an oven can be shaped with a Chisel without impacting its functionality.

Ovens are essential for the baking of bread. Cooking food in an oven takes a longer time, and thus reduces the risk of burning the food.