From TerraFirmaCraft Plus Wiki
Jump to: navigation, search
Deer 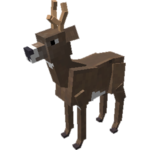 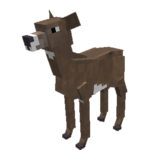 Deer are covered in brown fur, with patches of white on their belly and face and a black nose. The young fawns are covered in white speckles that fade as the animal ages. Bucks have antlers that slowly grow as the fawn ages into adulthood.

Deer provide the player with meat, fur, sinew and bones.

Deer will flee from Players, Bears and Wolves. After a certain period of time, the deer will calm down and return to grazing, but can easily be spooked again. Like other wild animals they try to avoid being out in the rain and sleep at night, even though they currently lack a sleeping animation.

Deer currently have the code to produce offspring, but do not have an item set to trigger mating.