From TerraFirmaCraft Plus Wiki
Jump to: navigation, search
Bear 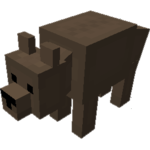 Bears are covered in brown fur, with black eyes and nose.

Bears will seek out and target Sheep, Deer, Pigs and Players, leaping at their target to deal damage. Out of all the hostile mobs, bears deal the most melee damage.

A maximum of 2 Bears can spawn within a single chunk, and they may despawn randomly over time.

Bears currently have the code to produce offspring, but do not have an item set to trigger mating. Unless they are separated, cubs will follow their parents or other adult bears until they become adults themselves. They take 3 months to fully grow into adulthood.