From TerraFirmaCraft Plus Wiki
Jump to: navigation, search
Torch 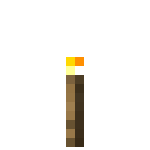 Torches are made by lighting sticks in a firepit or a forge. Sticks do not have the standard heat values, and instead display "Catching Fire" and "Lit" before turning into torches. They are placed and function like normal Minecraft torches, giving off the normal light level. However, torches are broken by collapsing blocks. They also go out after a few days or if they get wet from rain.

Torches can also be made less efficiently on the move from a stick by right clicking with it on a lit torch in the world.

After a few in-game days, lit torches placed in the world will go out and no longer produce light. The un-lit torch stays in place and can be relit without expending resources by right clicking with a lit torch. A lit torch can also be kept alight for a few more days by right clicking it with another lit torch.

Right clicking a lit torch without a stick or other torch in-hand will extinguish it. Breaking an unlit torch will cause it to crumble and disappear.

Dropped torches can light a pit kiln or log piles. Flying embers show the process is working. This is a crucial step in the production of charcoal.