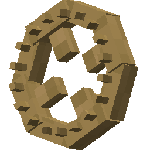 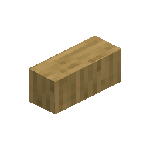 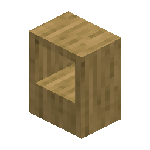 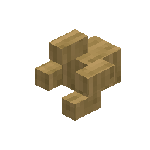 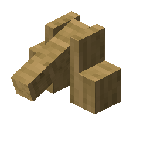 Axles transmit power from a mechanical power source to the device where the power will be used.

Gears allow rotation to be transferred from a vertical Axle to a horizontal Axle, and vice versa. They also allow the player to change the speed to power ratio of a mechanical system. Right click the end of an axle which is directly supported by an Axle Bearing to attach a Gear. Shift click a Gear to remove it.

Gears are crafted by surrounding an Axle with 4 Lumber and a Saw. The Axle and Saw are not consumed in the crafting recipe. Gears start with 18 teeth. Crafting a Gear with a Saw will return a gear with 1 less tooth. This can be repeated until the gear reaches 9 teeth, which is the smallest Gear. An existing Gear can be copied in one step by adding it into the Gear recipe along with the Saw and Axle.

The Crankshaft converts rotation into linear motion. Crankshafts can be attached to the back of a Bellows when there is an Axle adjacent to the space behind the Bellows.

Note: Waterwheels require vertically falling water and cannot be placed on horizontally flowing water or rivers. This will NOT change in the future to include waterwheels in rivers due to difficulties with implementation and as per request of the Developer.

Power is supplied by a Waterwheel, then transmitted by Axles, Couples, Gears, and Crankshafts to be used by Devices (currently: the Quern and Bellows).

Connecting blocks (Axles, Couples, Crankshafts) add 1 load per block. A Quern adds 5 load. A Bellows adds load depending on the speed its crankshaft is turning. The increase is nonlinear, so doubling the speed more than doubles the load.

Gears with ratios other than 1:1 will multiply or divide the load downstream. A Large 18-tooth gear turning a small 9-tooth gear (2:1 ratio) will double the load and rotation speed of all subsequent blocks and devices. A small 9-tooth Gear turning a large 18-tooth Gear (1:2 ratio) will half the load and rotation speed of subsequent blocks and devices.

Mechanical systems can currently be used to power the Quern and the Bellows.

Querns can be adapted for mechanical automation by adding a Rind and Millstone.

Bellows can be automated by attaching a turning Crankshaft to the back of the Bellows. If gears are used to increase the pumping speed, the Forge can reach higher temperatures than they could if the Bellows were pumped by hand. This is essential for late-game metalworking, such as during the Steel age, where Steel must be melted at Brilliant White to create Black Steel.