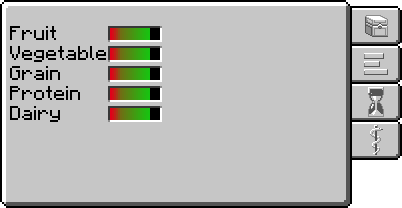 The primary way of obtaining food in Terrafirmacraft+ is through agriculture, i.e. farming. Wild crops generate in the world between Late Spring and Late Summer, and can be harvested for crops (if they are grown fully) and seeds. These seeds can be planted for a renewable source of food.

Fruit Trees occasionally generate in the wild, and will generate fruit when they are in season. This fruit can be harvested, and eaten, or can be turned into Saplings to grow more fruit trees.

Various types of fish and shellfish spawn in rivers and oceans and can be killed or caught with a Fishing Rod for food.

Animals can be butchered to obtain Meat, Hide, Fur, and Wool. Cows and their undomesticated variety, Aurochs, can be milked once familarized for Milk, which can be used to make Cheese. Chickens will lay eggs in Nest Boxes, which can be fertilized by hens, or harvested and cooked for food.

Red and Brown mushrooms can be cut with a knife to make them edible. Red mushrooms must be cooked before they are eaten, or they will poison the player.