From TerraFirmaCraft Plus Wiki
Jump to: navigation, search
Aurochs 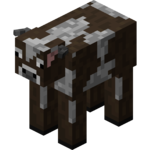 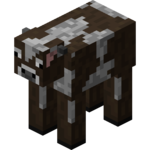 Aurochs are large mobs. They have dark brown coats with white spots and black hooves. Their eyes are larger than those of most mobs and appear somewhat unfocused. They resemble Norwegian Red Cattle. Female aurochs have a short horn on either side of their head and a pink udder. Male aurochs have more pronounced horns and no udder.

Aurochs provide more types of useful resources than all other neutral mobs and can be used to provide the player with meat, milk, bones, and hide. Female aurochs can be milked once a day by the player. This is done by holding either a Wooden Bucket or Ceramic Bucket and right-clicking on the aurochs’ udder. Milking an aurochs also increases its familiarity rating. Milk can be drunk or further processed into Cheese.

Aurochs are neutral mobs. Like other wild animals they try to avoid being out in the rain and sleep at night. If a player attacks an aurochs it will fight back by headbutting the player, dealing a large amount of damage and knocking them back. Aurochs will not continue attacking after the first retaliatory strike. Getting too close to aurochs for prolonged periods of time will cause them to get angry and attack the player, the player will be warned first through chat messages. Aurochs will follow players holding all grains.

Aurochs can be bred with all grains. Aurochs require at least four days of familiarization to be bred. Pregnancy lasts for nine months, after which a single calf is born.

Unless they are separated, calves will follow their parents or other adult aurochs until they become adults themselves. A calf looks similar to an adult aurochs, but its body is smaller and it does not have any horns. Calves also move more quickly and make higher-pitched noises than adult aurochs. They take 3 years (36 months) to fully grow into adulthood.

Adult male aurochs have a 25% chance of dropping two Horns, which can be crafted with a knife into the Blowing Horn and also yields the Horn Tip. The Horn Tip can be used to craft a Waterskin. The Blowing Horn can be further crafted into the Horn Strips to make a Composite Bow.

Right Click-ing on a Familiarized Aurochs and ibex. This will return one full Bucket of Milk, which can be drunk directly from a Bucket, Ceramic Jug, or Glass Bottle to restore Hunger, Thirst, and Nutrition (Dairy), or placed into a Barrel or Large Ceramic Vessel, where it can be stored indefinitely or curdled by the addition of Vinegar and sealed to craft Cheese.