From TerraFirmaCraft Plus Wiki
Jump to: navigation, search
This page contains changes which are not marked for translation.
Other languages:
English • ‎русский

TFC+ should work on any system which is capable of running Minecraft 1.7.10 and Minecraft Forge.

TFC+ places a much higher load on your computer's processor than vanilla Minecraft and uses more memory as well, so performance may suffer on low-end systems. If you are having issues with lag or FPS, try the tips listed at Performance Optimization.

Follow the instructions here to create a modded Minecraft profile. When creating the profile, select Minecraft version 1.7.10. The default version of Forge is fine. When you get to the point of adding a mod, search "terrafirmacraftplus" and select TFC+ from the list.

Alternatively, you can install the Baseafirmacraft profile, which includes many utility mods commonly used alongside TFC+.

To increase the memory allocated to the profile, click the gear icon on the top right side of the profile page. Select "Profile Options". In the window that opens, unselect "Use System Memory Settings". Then move the slider to the desired amount of memory and click "Okay".

Once you have Launched TFC+ through the Twitch App, you can launch it again without using Twitch -as long as you haven't run any other instances of Minecraft in between. To create a desktop shortcut, naviagate to the default location where Twitch installs minecraft

and right-click on Minecraft.exe and select "Send to Desktop (Create Shortcut)"

Clicking the shortcut on the desktop will open the Minecraft Launcher set up for the profile last used by the Twitch App.

If you want to manually add other mods or find your screenshots, the default path is: C:\Users\USERNAME\Documents\Curse\Minecraft\Instances\PROFILE_NAME

You can also use the Baseafirmacraft profile, which includes many utility mods commonly used alongside TFC+. On the instance manager screen, click on the + on the lower left hand side of the screen, and select "CurseForge" from the tabs at the top. Search for "Baseafirmacraft", and click "Download Latest". After the download is complete, you are ready to play TFC+.

To increase the memory allocated to the instance, click the gear icon on the top right side of the window. Select "Java". Find "Java Memory" and move the slider in order to select the amount of memory that you wish to allocate to your instances.

If you want to manually add other mods or find your screenshots, the default path is: (on Windows): C:\Users\USERNAME\AppData\Roaming\gdlauncher_next\instances\PROFILE_NAME and (on Linux): /home/USERNAME/.config/gdlauncher_next/instances.

Start with a vanilla install of Minecraft 1.7.10 using the official minecraft install launcher located at minecraft.net.

If your Minecraft Launcher is running 1.8+:

Run once to create necessary files.

'Now that you have set up vanilla 1.7.10, you'll want to go to the minecraft forge website and download the recommended or latest "installer" package (both are v1614 as of latest update to the page).

Once downloaded, double click and run the .jar file. A screen will pop up. The install path should be the default install path that minecraft installed into. If so just click OK to install forge. 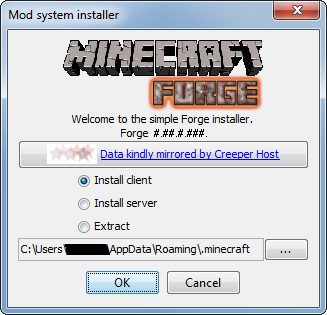 When finished you should see a screen pop up:

Open the Minecraft launcher again. There may already be a forge instance created, but for cleanliness sake this guide recommends you to create your own under \AppData\Roaming\.minecraft\tfc rather than using the default directory (\AppData\Roaming\.minecraft). This way you can have several modded versions of minecraft coexist. Simply go to the installations menu to create a new forge instance (the forge instance will be at the bottom of the list) and select a new directory. Fill in any login information necessary, and finally press Play.

When you get to the main menu, exit out of Minecraft.

Downloading TerraFirmaCraft and Other Mods

CurseForge is one of the mod repositories where you can download Minecraft mods. Terrafirmacraft+ is primarily released on CurseForge. You may also find that some Addons are located on Github. Keep in mind that CurseForge mods are moderated and vetted for content, while Github mods may not be. Never randomly download from links people give you! This guide will only cover the installation of Terrafirmacraft+.

Download TFC+ from the link above and copy the .jar file into the Mods folder in the minecraft/forge install.

If you've been following the guide exactly, your mod folder will be under /.minecraft/tfc/mods

Note: Do NOT unzip the file!

If you are on OS X then there are some extra steps you will have to take:

TerraFirmaCraft should now be installed. Run minecraft again making sure your Profile is still set to Forge.
Once in game click the mods button and you should see something similar the following: 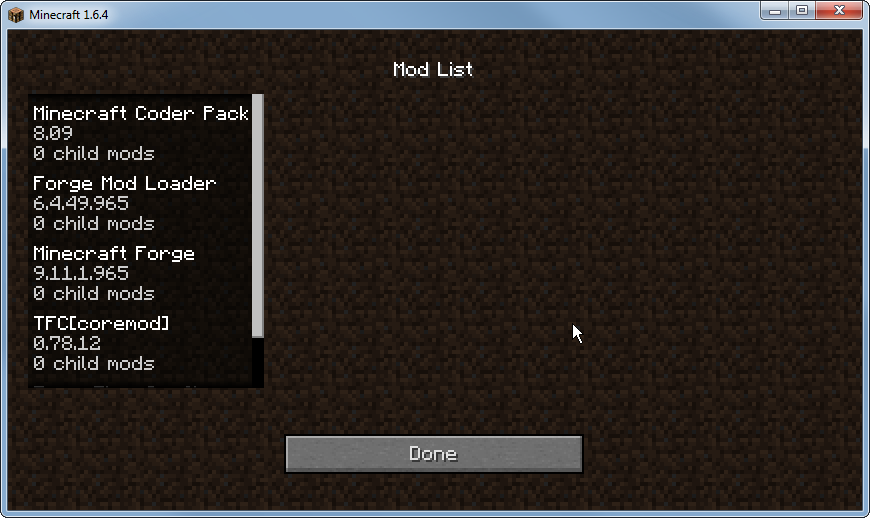 If you are interested in playing Terrafirmacraft+ with shaders (via Optifine), there are some tweaks that you will need to make to the shaders so that they can recognize TFC+ water and leaves. Please see the Shader Setup page for instructions on how to set up shaders with Terrafirmacraft+.

If you are having trouble running the game at a good frame rate, see Performance Optimization.

If you'd like to record the game with OBS while fullscreen, you'll need to apply certain fixes to minecraft and OBS. In 1.7.10, OBS studio will crash Minecraft in fullscreen simply by being open. To run minecraft in borderless window mode, add:

to your arguments. You can then hit Windows key + Up arrow to center the screen. You can also edit options.txt in .minecraft to turn fullscreen:false in order to avoid the game automatically fullscreening after startup. You may also need to add --allow-opengl to the shortcut of your OBS program in order to run the recording in OpenGL mode, if it is still having issues.

A server installation of TFC+ has a few requirements.

Second, the server must have Java installed. If you are making a server using a Virtual Private Server (VPS) host, you must install Java on the operating system you wish to install TFC+ on.

Third, for others to connect to the server, the computer must be port forwarded. If you are using your own computer to run a server, this is important.

Fourth, TFC+ itself and Forge must be installed.

This article covers the fourth step; the other three steps must be figured out on your own.

It may not be necessary to follow these steps if your server host has a web console for installing mods. In that case, set your server to run Forge 1.7.10 (1558 or 1614), and look for "Terrafirmacraft+" in your server host's mod browser.

In this step, you will download the Forge Installer and TFC+.

TFC+ can be downloaded from Curseforge.

If you are using a rented server, you must connect to your server in this step. If the server you are renting is running Linux (which is the default Operating System for most rented servers), use a SSH client to connect to the server. The exact specifics of installing a SSH client, connecting to the server, and basic usage of the server, is out of the scope of this article. However, this information can be easily found online.

Create a folder on your server computer where you want to start your installation. For example, you can use C:\TFC_Server (Windows), or ~/TFC_Server (Linux).

If you are running a server on your own computer, you can start the Forge Installer by running it with Java. Select "Install Server", and choose the directory you wish to install the server to.

If you are renting a server which is running on Linux, move the Forge Installer to the directory you wish to install the server to, and run the following command:

Run the server once, either by running forge_universal_VERSION.jar with the Java Runtime, or by using the following command:

The server may crash and ask you to accept the EULA; open eula.txt with an editor such as nano, and change eula=false to eula=true. The server is now ready for TFC+ installation.

Now, you will create a script to run the server with. On Windows and Linux, this will be run.bat or run.sh respectively. Use a text editor such as nano to create the script.

Starting up the Server

Run run.bat or run.sh. If you are renting a Linux server, and are connected to the server via SSH, run the script using ./run.sh. If you are running a server on your own computer using Windows, double click on the file to run it.

On Linux, you may have to grant a permission for the file to be executed first. Do this by using the chmod +x run.sh command in a terminal. The server can now be used.